Making of Our Holiday Card 2016 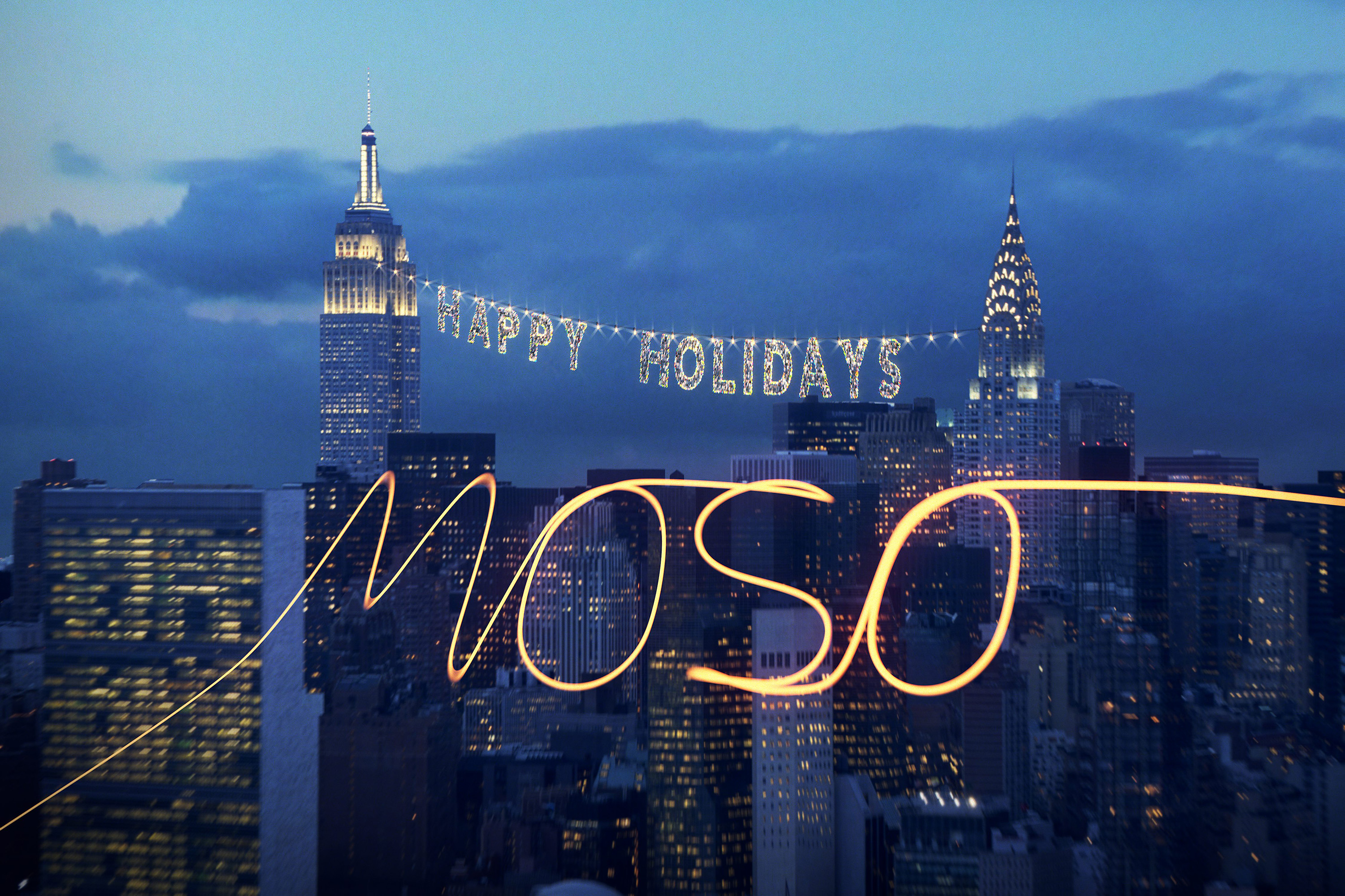 To change the pace sometimes in between projects, here at Moso, we like to play with different tools and techniques… we get to do exactly that every Holiday Season… We dont always have the same amount of time, but always like to make something interesting, and mostly have fun doing it.

So we decided to make a tutorial and share the scenes for others to maybe learn, or critique our silly ideas.

The concept behind our 2016 Holiday Card was pretty simple, we were going to hang a holiday ornament wire from the Empire State building to the Chrysler building. We initially thought we may just do a still image, base on some photos we took from a helicopter for a previous project.
After the initial sketch the idea evolved into giving a bit of drama by not showing the whole image until the end… 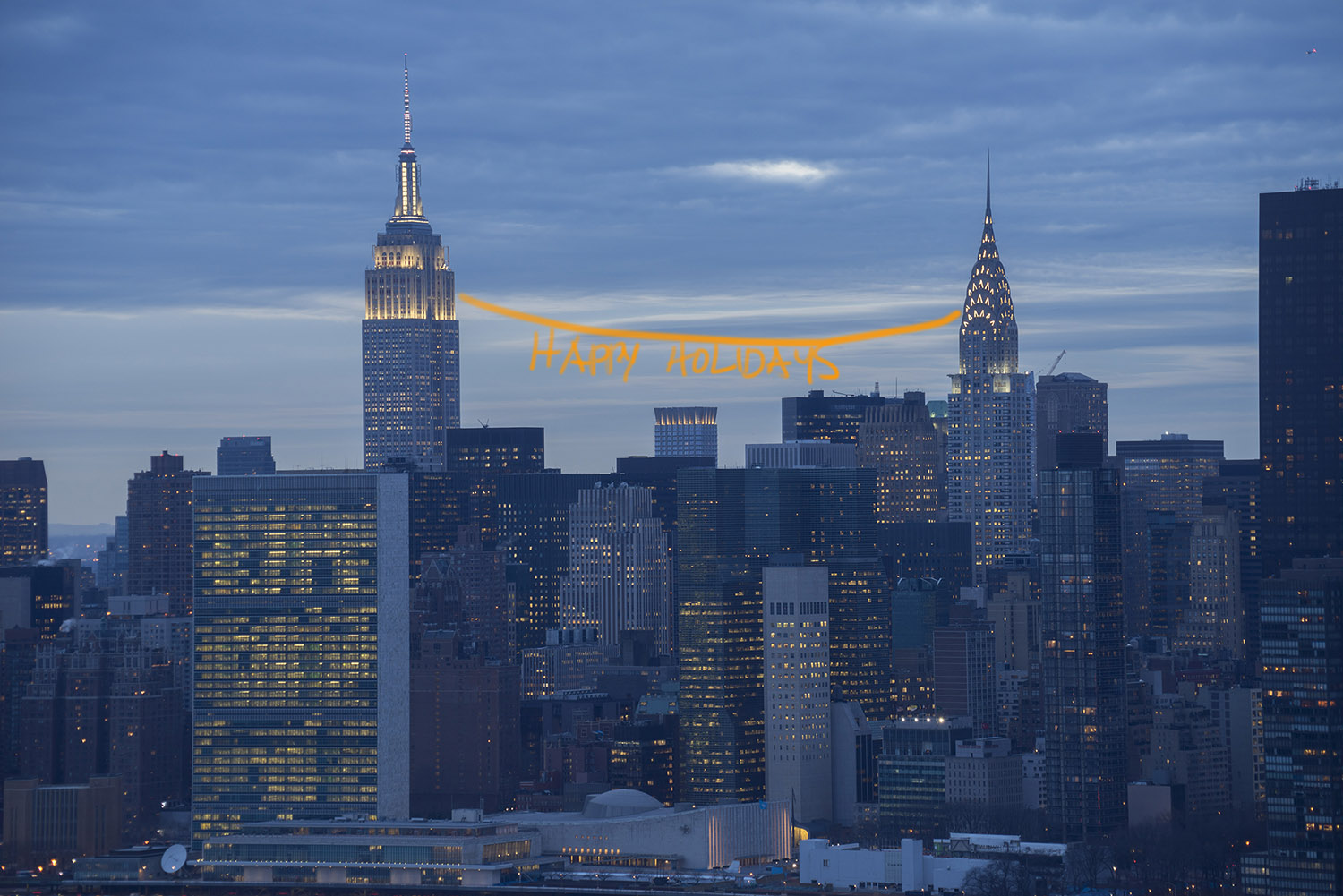 Once the concept was defined, everything else just flows. We had a plan, and just needed to follow the steps.
More or less the steps involved were: Camera Matching/Mapping and Animation, Rigging (basic), Modeling of assets, Animation of Logo, Rendering and Compositing.

First step was to do a camera match, and animate the camera. to help this we had a really old an not up to date partial model of midtown NYC which we used for this process… we had to create a few new buildings to fit the photo but they could be low in detail, as we were planing to use the photo as much as possible.

Then we setup the Camera Map Material; Is a very straight forward process, with plenty of documentation about it.
Many times for a small camera motion, or a fast camera where there will be lots of motion blur, you can use only one image to map over all your geometry. However, if there is too much parallax between your geometry elements, the texture of the front will repeat on the back objects destroying the illusion.
In this case, we created two textures one for the front objects (the original photo) and one for the next layer behind (a retouch version where we deleted partial areas of the front buildings)
We also are using an alpha mask, as the geometry of the buildings is not perfectly accurate to the photo (it never is) so this way we can make sure we don’t get remnants of the sky from the photo onto the geometry. 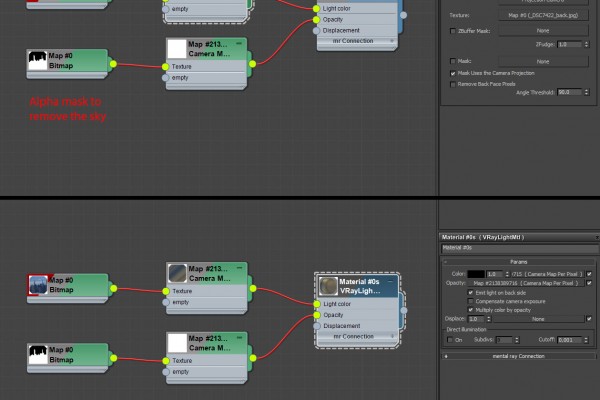 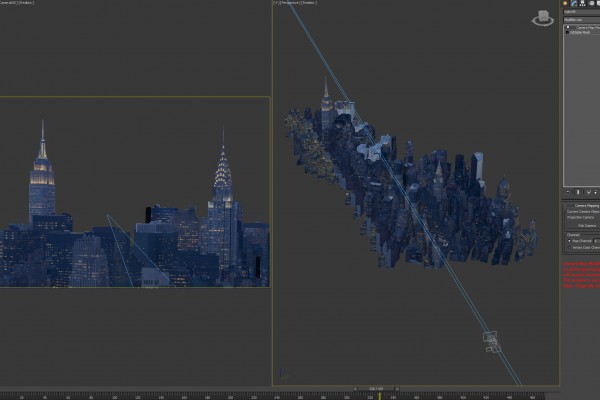 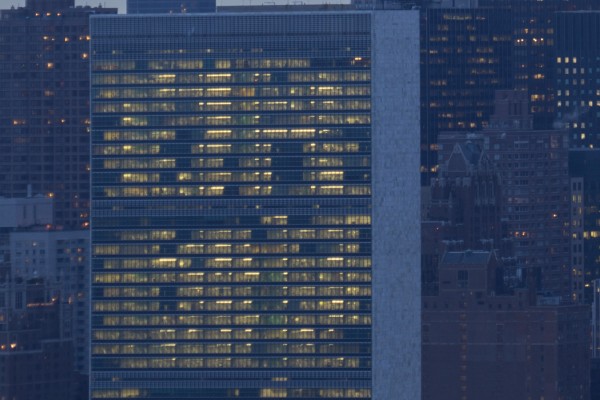 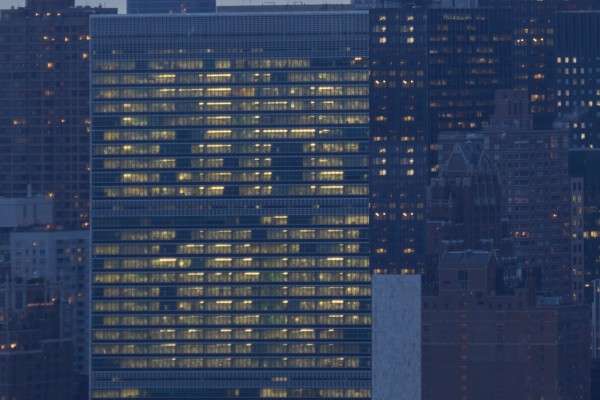 Animating the Camera was very straightforward, the only rules was not to see anything that was not visible in the original camera.

This was a very simple setup, however, did require a few tests to make sure it was visually good enough. Our goal was to add a bit of motion to the elements hanging so they felt a bit more organic/real. especially the coins as their reflection will change and create a very sparkly effect very appropriate to the occasion.

First, we tried to simulate with Pflow, and while the effect was interesting, the rotation of the coins was not actually working the way we wanted.
we then try an actual simple approach, but very flexible, using Forest Pro to scatter our coins and some noise maps to control the rotation… it wasn’t as realistic in terms of physics, but gave us a better overall effect, plus much easier to setup with a plugin we use on a daily basis.
Below are a few of the test done, the last one being done in forest and the one we ended up using.

Consistent with everything else modeling was kept to a minimum. there were only a wire, bulbs and coins. The later were perhaps the once were we spend a bit more time, as we wanted to make them a bit special, so we design them to have our Logo in them.

This was done again in a very simple way. we just draw a script version of our logo with a continuous spline, and then  animated a Cylinder with a Path Deform modifier to travel from one end to the other.
We also rendered it as a separate pass, especially due to the fact that we multiplied the motion blur at very high values which gave us the trail effect seen on the video

No much to share regarding this, renderings were done with Vray, (not that this amazing rendering engine was needed for such simple scene).
Compositing was put together in Nuke, just two layers a few grade glint and glow nodes and that’s it. 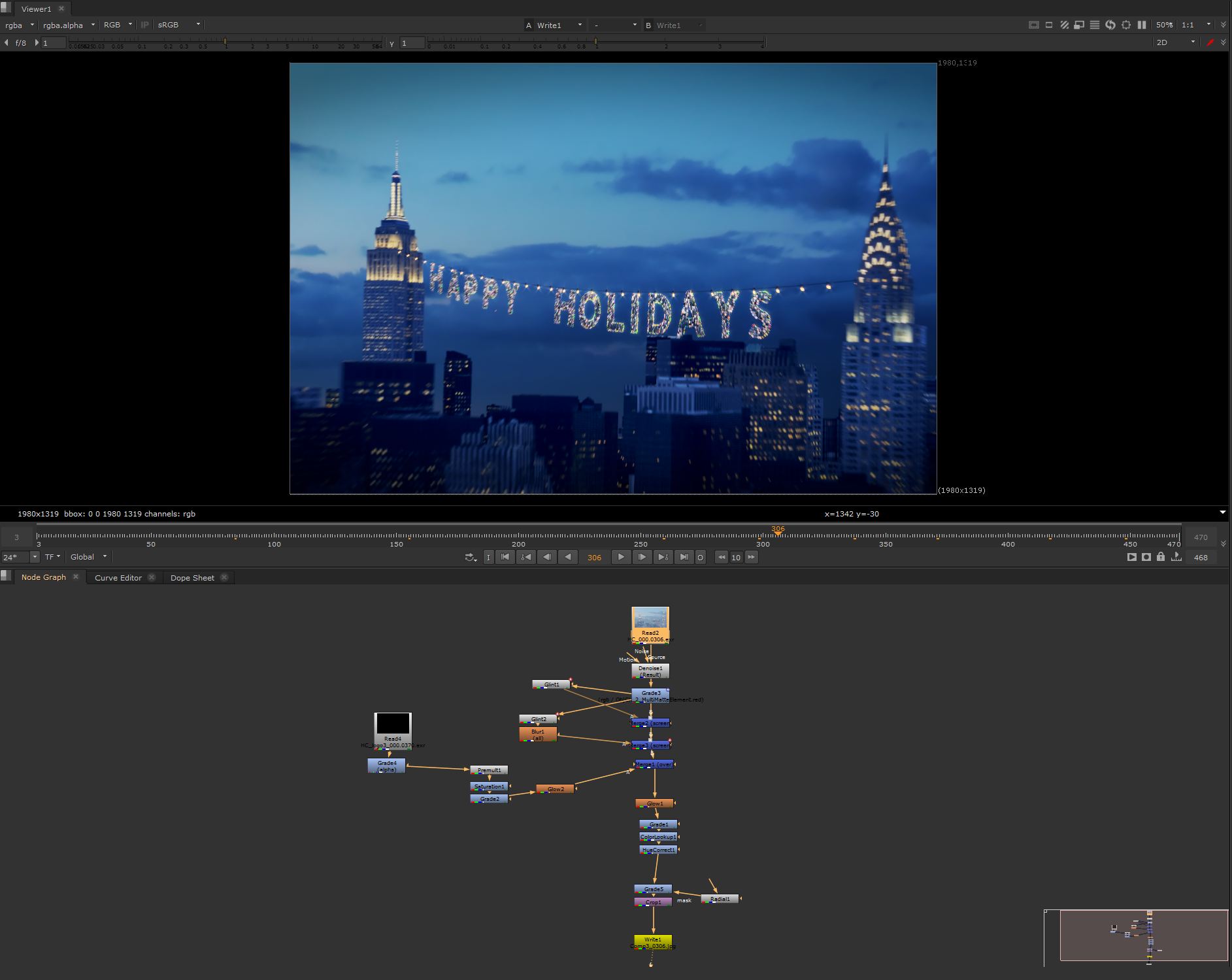 We enjoyed the process of making this small video and were pretty glad with the result considering overall it was done in only 4 days.

As a little gift to whoever is interested we are sharing the 3dsMax file for anyone to look at, play with…There are two Environment skies from CGskies, that we are not including as they are a commercial product and only a small section of the 3D buildings
Aside from that, you are free to do as you wish with the file.

File can be downloaded from: